The army of Belarus started “mobilization exercises” near the borders of Ukraine. Such large-scale exercises have never been carried out in the border Gomel region before, he says LIGA.net Belarusian military observer Yegor Lebedok. Belarusians also check the readiness of their clinics to receive the wounded (spoiler – they are completely unprepared) and inspect communications for readiness for destruction.

The Russians want to pull back the forces of Ukraine from the east or are preparing a new invasion, now with the army of Belarus – a short analysis LIGA.net.

WHAT’S HAPPENED. Mobilization exercises with the involvement of special operations forces and “reserves” are held from June 22 to July 1 on the basis of military registration and enlistment offices in the Gomel region, which borders on the Kyiv, Chernihiv and Zhytomyr regions. The exercises are allegedly planned, but last year they were held in the Mogilev region – near the Russian border.

According to Lebedok, in February-March there was a sharp increase in funding for mobilization activities in the Gomel region. And at the end of May, the Belarusian dictator Alexander Lukashenko announced about the creation of the southern operational command, he recalled, and ordered to send new army units to the Ukrainian border so that the Belarusian military “gain experience.”

“That is, the Belarusian authorities consider Ukraine as a direct threat,” Lebedok states.

According to the official version, the training is aimed at checking the work of military registration and enlistment offices in wartime conditions. Under this pretext, the military enlistment office of the Gomel region is now actively checking the readiness of hospitals to receive the wounded and inspecting communications for readiness for destruction. This is evidenced by the internal correspondence of the Belarusian military, which LIGA.net reported by a law enforcement source.

In particular, the Bragin Central District Hospital reported to the military commissar of the region that the bed fund was almost full, and only one operating brigade was providing emergency assistance. 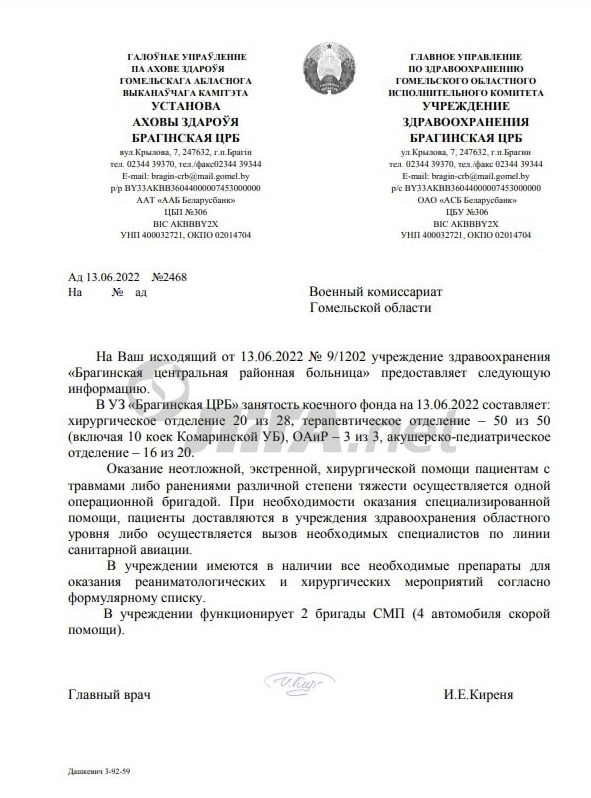 In the Khoiniki hospital, up to 85% of the beds are full, and there are no reanimobiles with equipment for transportation and emergency care. 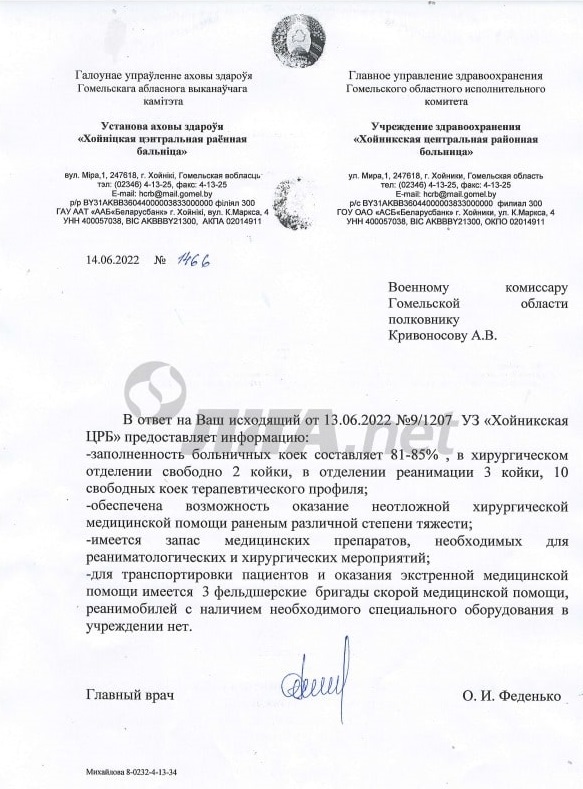 307 out of 403 beds are occupied in the Gomel hospital, there are no ambulances. 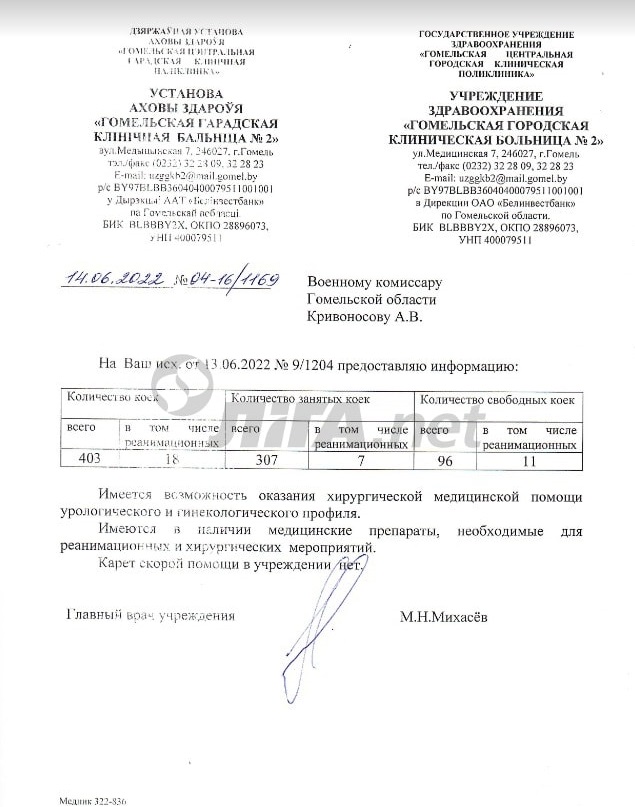 Meanwhile, in the regions bordering Ukraine, Belarus is deploying wooden dummies of tanks – for operational camouflage and demonstration of the presence, He speaks Speaker of the Ministry of Defense of Ukraine Oleksandr Motuzyanyk.

According to him, up to seven battalions of Lukashenka’s army are concentrated near the Ukrainian-Belarusian border in the Brest and Gomel regions. This is approximately 4,000 military.

In the border areas, engineering arrangements are underway, and the use of electronic warfare equipment is being recorded.

In addition, the special operations forces of Belarus are conducting exercises with the involvement of Russian instructors, reported at the General Staff of the Armed Forces of Ukraine. The main attention is paid to the conduct of sabotage and reconnaissance activities. Also, the Belarusian military, according to data publications Belarusian Gayun, dig trenches near the borders with Ukraine, Poland and Lithuania.

According to information Belarusian opposition mediaon the night of June 22, a new batch of Russian missile launchers for the S-300 air defense system was brought to Belarus – at least 16 missiles, and probably one Pantsir air defense missile system.

Read also: Belarus plans to increase the size of the army to 80,000 people – General Staff of the Armed Forces of Ukraine

WHY IS IT IMPORTANT. “We must consider Belarus as a threat. With the beginning of the invasion, we cannot do otherwise,” explains LIGA.net military man, secretary of the parliamentary defense committee Roman Kostenko (Voice). “Belarus is the same enemy as Russia.”

In his opinion, these “revivals” pursue the main goal – the containment of Ukrainian troops so that they cannot be transferred to other directions. “But we can’t discount the fact that Belarus can really cross the border at any moment,” the people’s deputy notes.

Belarusian oppositionist Andrei Sannikov agrees with him. “Even if the Belarusian army does not go across the border with Ukraine, the factor of distraction will play (the Armed Forces of Ukraine from other sectors of the front – ed.). The military cannot turn a blind eye to such activities,” he said in a comment. LIGA.net.

Lukashenka’s propaganda has recently been very actively promoting the thesis that “NATO mercenaries” can enter Belarus under the guise of Belarusian national formations fighting in Ukraine, military observer Lebedok states. “Propaganda does not expect Ukraine to attack on its own, but creates the expectation of “saboteurs,” he explains.

WHAT’S NEXT. While there is no threat of invasion from the territory of Belarus, convinces Head of the Main Directorate of Intelligence of the Ministry of Defense Kirill Budanov. And “if they have such thoughts,” Ukraine will immediately “take appropriate actions.”

For an offensive from Belarus, it is necessary to create a powerful offensive grouping there, says Motuzianyk. By words commander of the grouping of forces and means of defense of Kyiv Alexander Pavlyuk, “suddenly” the Russian invaders will not be able to reach Kyiv. But if successful in the east, a significant part of the Russian forces can be moved to the Kiev direction and involved in the formation of a new strike force.

Consequently, the danger of a second attack on Kyiv remains.

Experts do not believe in an independent attack by Belarus on Ukraine. “These can be exclusively common actions with Russia,” says Lebedok. “Or, if Russia returns to the northern regions of Ukraine, Belarus can do something in the western direction. Like sabotage and reconnaissance activities.”

Kostenko advises not to overestimate the capabilities of Belarusian DRGs in Ukraine. “Currently, sabotage groups have a rather low efficiency. Cruise missiles are much more effective,” he said. According to him, the Belarusian army has no combat experience, and this will be a key factor if they decide to cross the border with Ukraine.

“So far we don’t see them preparing for an invasion. Yes, they are building up their capabilities, but this is only done to keep our troops. We keep everything under control and prepare for all scenarios,” Roman Kostenko reassures.

Sannikov advises not to forget about the increase in Russia’s aggressive attacks towards the Baltics. In response to Lithuania post about the termination of the railway transit of a number of Russian goods from / to the Kaliningrad region, the Russian Federation Council openly threatens: if “the EU does not immediately correct the situation, the Russian Federation will have a free hand to resolve the issue by any means.”

Therefore, Lebedok suggests that mobilization on the border with Ukraine can only be a strengthening of the rear before a possible Russian attack on the Baltic countries.

“Putin’s goals are not only Ukraine. The Belarusian bridgehead works very well to the north and west,” he explains. “You can scare everyone that Putin will go to Ukraine, but in the end he will turn to Lithuania and Latvia. And these territories in Belarus are equipped much better, because we always had “enemies” there.

Read also: “Lukashenko is one step away from suicide.” Why Belarus is pulling troops to the border with Ukraine 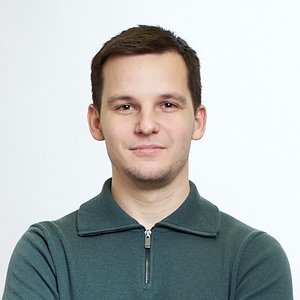 France, Germany, Italy and Romania are in favor of urgently granting Ukraine the status of an EU candidate – news from Ukraine, Politics