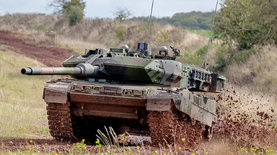 Ukraine expects “green light” from Berlin to purchase 100 new self-propelled artillery howitzers from Germany Panzerhaubitze 200010 air defense systems IRIS-T, as well as for the supply of weapons from the reserves of the Bundeswehr. Told about it Ukrinform Ukrainian Ambassador to Germany Andriy Melnyk.

He specified that in part ACS a “corresponding offer” from German industry has already been received: the matter is to be resolved by the German government.

“I hope for support from Berlin in the purchase of the next 10 stationary air defense systems IRIS-T. <...> By the way, even the Bundeswehr does not yet have such air defense,” the diplomat specified.

Purchase contract first air defense system was in the amount of 178 million euros (and at the expense of the German government). “A special thanks for this. Chancellor Scholz”, Miller said.

He said Ukraine understands the Bundeswehr’s limited capacity after years of austerity, but is convinced that Berlin can continue to supply weapons from army depots without compromising the country’s defense capability.

“We have insider information. Nothing prevents Berlin from making a decision to send the Armed Forces of Ukraine at least a part of about 800 armored personnel carriers Fuchs325 tanks Leopard-2 or 380 infantry fighting vehicles Marder“, – listed Melnik, adding that he hoped that Berlin “will provide Ukraine with the maximum possible military assistance, including from its own reserves.”

Read also: ‘Complete nonsense’ that Ukrainians need to study for Leopard for a long time – ex-general of the Bundeswehr

Zelensky had a “fruitful” talk with Orban and invited him to Ukraine – Ukrainian news, Politics

You can’t negotiate with a terrorist who kills civilians – Zelensky – Ukraine news, Politics

Russians seized Horske, Lugansk region: they entered from two sides – the head of the VA – news from Ukraine, Politics