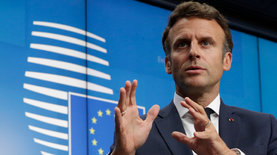 Foreign Secretary Dmitry Kuleba said that the President of France Emmanuel Macron played a very important role in the fact that Ukraine received the status of a candidate for accession to the European Union. He spoke about this on the air of the only telethon on Thursday evening.

“The list of skeptics has been known for a long time. These are the Netherlands, and Denmark, Sweden, Portugal – they all had a certain vision. Germany was in this camp. French President Emmanuel Macron played a very important role, and I will note that it was during the French presidency this decision was made. It was a principled position to do it right now,” Kuleba said.

The turning point, he said, was the visit of Macron and the leaders of Germany, Italy and Romania to Kyiv, because before that the situation was very fragile.

“Wall” on the border of Poland with Belarus: 140 km is already ready – Ukrainian News, World

Five main news of Ukraine and the world at 19:00 June 18 – news from Ukraine, Politics

General Cavoli from the United States will become the commander-in-chief of NATO forces. He is a specialist in Russia – Ukrainian News, World