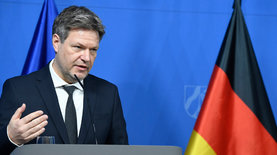 German Economy Minister Robert Habeck believes that the gas war unleashed by Russia proves the high effectiveness of the economic sanctions imposed against it. Russia has got too much money that has nothing to spend on, and it can afford to turn off the gas to its largest client, he explained on air RTL.

“Indeed, Putin gets money from the sale of fossil fuels, but he can buy less and less with them, because the West has imposed sanctions on so many goods. And since he cannot buy anything with this money, he says: if this money is more for me are not needed, I will reduce gas supplies. This is a sign that the sanctions are very effective,” Khabek said.

But awareness of the effectiveness of sanctions does not simplify the situation with gas. Before the war, the Germans paid 40-60 euros per month for gas, now it is 120 euros. According to Habek, the cost of gas will increase even more, because imported liquefied gas is much more expensive than Russian pipeline gas.

He fears that the rise in prices will trigger a domino effect and lead to a serious recession.

“There is a risk that energy suppliers will find themselves in economic situations in which they will no longer be able to borrow money in the market for gas purchases,” Habek said on air. ARD.

The minister compared this scenario to the collapse of Lehman Brothers in 2008, which set off the global financial crisis.

Zelensky said that the Russian Federation does not recognize the sovereignty of Ukraine – Nazism and genocide – Ukrainian news, Politics

Stoltenberg: NATO will say that Russia is a direct threat, China is not our enemy – Ukrainian news, Politics

40 km from Ukraine: an explosion occurred near a military base in the Bryansk region – news from Ukraine, Incidents