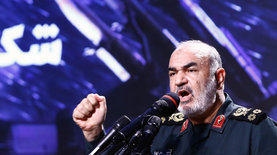 Iran has replaced the head of intelligence of the Islamic Revolutionary Guard Corps (IRGC) after a series of deaths of prominent members of the Corps. This is reported RFI.

IRGC chief Major General Hossein Salami has appointed Mohammad Kazemi as the new head of the intelligence service, a Corps spokesman said in a statement.

Kazemi has been appointed to replace Hossein Taeb, who has held the position for over 12 years.

RFI notes that the replacement of the head of the Iranian intelligence service is being carried out after a series of assassinations of a number of high-ranking functionaries.

On May 22, IRGC Colonel Sayyad Hodaye, who had recently been appointed to a senior position in the Iranian military program for the development and production of UAVs, was shot dead in Tehran. RFI reports that he was gunned down by a group on motorcycles.

On June 3, IRGC Colonel Ali Ismayilzadeh, one of the commanders of the 840th Al-Quds unit, a colleague of Khodayye, died “during a fall from the roof of his house.” Moreover, the command of the IRGC, according to Iran International, tried to hide the fact of his death.

In official publications of the IRGC, Khodayeh is referred to as the “protector of the shrines” – a title used for those who act on behalf of Iran in Syria and Iraq.

On June 13, Ali Kamani, an employee of the aerospace division of the Corps, was killed. The statement did not give details of what happened, but said that he was killed while on an assignment in the central province of Markazi.

The guard corps accused “Zionists” of involvement in the death of these people and threatened Israel with revenge, RFI writes.

The publication also indicates that last week Israel urged its citizens to immediately leave Turkey due to a possible threat to their security from the Iranian security services.

Foreign Minister Dmitry Kuleba on the supply of weapons from partners – news from Ukraine, Politics

NATO Secretary General advised to listen to Turkey’s position on the accession of Finland and Sweden – news from Ukraine, World