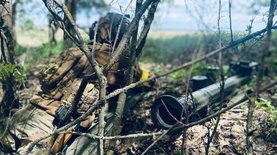 On June 14, in the southern direction, the Armed Forces of Ukraine launched rocket and air strikes against the Russian occupiers. The enemy suffered significant losses in manpower and equipment. About it informs Operational Command South.

As noted, during the day, the occupying troops twice tried to inflict air strikes on the positions of the Armed Forces of Ukraine. In the morning, the Ukrainian military from MANPADS shot down an enemy helicopter, and in the afternoon another enemy Mi-8 attacked a river crossing, trying to limit the maneuvers of the Ukrainian Armed Forces unit.

In response, the aircraft of the Air Force of the Armed Forces of Ukraine delivered three strikes on the accumulation of manpower and military equipment of the Russian invaders in the Kherson region.

Ukrainian troops launched rocket attacks on fuel depots and the area where equipment was concentrated, and two enemy command and observation posts were suppressed.

In just one day, 70 Russian invaders and more than 60 pieces of enemy equipment were destroyed in the southern direction, including:

Read also: Zelensky: The more losses Russia suffers in Donbas, the less power it will have for war

Montenegro imposed sanctions against the deputy head of Putin’s administration and deputies of the State Duma of the Russian Federation – news from Ukraine, Politics

Johnson at G7 will call on France and Germany to increase military support for Ukraine – Ukraine news, Politics

State Bureau of Investigation accuses former head of Crimea of ​​collaborationism, they found a whole museum in his possession – photo – Ukrainian News, Politics