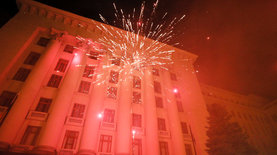 The city council banned the sale and launch of fireworks in the capital for the duration of the war, as well as the movement of cars without mufflers around the city. About it informed Mayor of Kyiv Vitaliy Klitschko.

“Today we have decided to ban the sale and launch of fireworks in Kyiv and the movement of cars without a silencer around the city during the war. A few years ago there was already a decision to ban fireworks, but we see that not everyone behaves adequately. There is a war in Ukraine, shelling continues of our cities, and some citizens arrange fireworks! Or drive cars through the streets like a jet plane! There should be responsibility for this,” Klitschko said.

The first decision provides that for the period of martial law and within 30 days after its termination or cancellation, the sale of fireworks, salutes and pyrotechnics in Kyiv is prohibited, as well as their launch.

The second decision provides for a ban on the traffic in the capital of vehicles with a “forward flow” exhaust system for exhaust gases, as well as other systems that do not have a noise absorber.

Read also: Roman Ratushny street. The people of Kiev voted for the de-Russification of the capital – the results

Johnson: If we can’t support Ukraine, I will consider resigning – Ukraine news, Politics