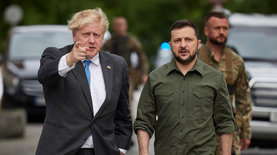 Ukrainian refugees should not try to enter the UK illegally. According to the Prime Minister of this country Boris Johnsonsuch persons can be deported to Rwanda, writes The Guardian.

Britain recently agreed with Rwanda on the forced resettlement of migrants illegally crossing the English Channel in trucks or boats. Ukrainian refugees now have an easier way to get to the UK without a visa – through Ireland, which in March temporarily abolished the visa regime with Ukraine and has an open border with the United Kingdom.

Although the resettlement programs in Rwanda were designed for Africans, Johnson said that, in theory, Ukrainian refugees could also be affected.

“The only reason a person can be sent to Rwanda is if they arrive in the UK illegally. We have issued 130,000 visas to Ukrainians and they have at least two very good routes to come to our country. But if you come here illegally […] I’m afraid that yes, theoretically it can happen. But I think it’s very unlikely,” Johnson said.

Eight main news of Ukraine and the world at 21:00 June 13 – news from Ukraine, Politics