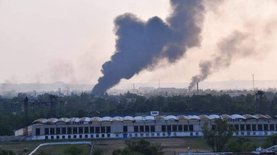 Russian troops are trying to completely capture Severodonetsk and continue the offensive from Izyum to Slavyansk. About it reported in the evening summary of the General Staff of the Armed Forces of Ukraine.

On the Volyn and Polesye directions the engineering equipment of the terrain in the border areas of the Pinsk district of the Brest region is underway. The threat of missile and air strikes from the territory of Belarus continues to persist.

On the Seversky direction the enemy fired at the positions of our troops from mortars in the border areas of the Sumy and Chernihiv regions. In order to clarify the position of our units and adjust the fire, he conducted aerial reconnaissance of the UAV. To disrupt the command and control system of the defense forces, the enemy used electronic warfare systems.

On the Kharkiv direction the main efforts of the enemy are concentrated on holding occupied lines, preventing our troops from reaching the state border of Ukraine north of Kharkov.

On the Slavic direction the main efforts of the aggressor are concentrated on the continuation of the offensive in the direction of Izyum-Slavyansk. The enemy unsuccessfully conducted assault operations in the direction of Dovgenkoye – Krasnopole. The enemy tried to improve the tactical position in the area of ​​​​the village of Dolina. Ukrainian soldiers fought back and forced the invaders to retreat.

On the Liman direction The enemy did not conduct active operations, fired at our units from barrel artillery.

On the Severodonetsk direction the occupiers continue to fire at the defense forces with cannon artillery and multiple launch rocket systems. Enemy units are conducting assault operations in order to establish complete control over Severodonetsk, the fighting continues. In Toshkovka, our defenders successfully repelled another enemy assault.

On the Bakhmut direction the enemy fired at our troops from barrel and rocket artillery. Ukrainian soldiers inflicted losses on the enemy during his offensive on the directions of Vasilyevka – Yakovlevka and Vasilyevka – Berestovo. The invaders have withdrawn.

On the Avdeevsky, Kurakhovsky, Novopavlovsky and Zaporozhye directions The enemy did not conduct active operations. In order to constrain actions and prevent the transfer of units of our troops to other directions, the enemy fired from mortars, cannon and rocket artillery.

On Yuzhnobuzhsky and Tauride directions the enemy continues to hold defensive positions. He is trying to improve the engineering equipment of positions in the areas of Bezvodnoye and Ishchenko settlements.

Read also: Austin at the opening of Rammstein-3: We can’t delay with help to Ukraine – the stakes are very high

Stoltenberg: We do not see an increase in the readiness of Russian nuclear forces, but the rattling of the Kremlin is dangerous – Ukrainian news, Politics

Zelensky asks Zaluzhny to conduct inspections due to supply problems in the Armed Forces of Ukraine – Ukrainian news, Politics