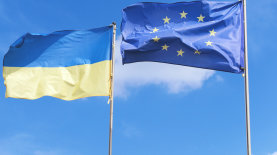 The European Union is firmly committed to providing further military support to Ukraine to help it exercise its inalienable right to self-defense against Russian aggression and defend its territorial integrity and sovereignty. This is stated in the adopted today at the summit in Brussels conclusions European Council.

The European Council condemned Russia’s aggressive war against Ukraine and declared its support for the economic, military, social and financial stability of Ukraine.

The European Council strongly condemned Russia’s indiscriminate attacks on the civilian population and civilian infrastructure and called on the Russian Federation to “immediately and unconditionally withdraw all its troops and military equipment from all of Ukraine’s territory within its internationally recognized borders.”

Russia was also urged to comply with international humanitarian law, including in relation to the treatment of prisoners of war, and immediately allow citizens of Ukraine forcibly taken to Russia to return safely.

“Russia, Belarus and all those guilty of war crimes and other grave crimes will be held accountable for their actions in accordance with international law,” the conclusions say.

In addition, the European Council declared the continuation of sanctions pressure on Russia and the prevention of circumvention of restrictions.

“The European Union remains firmly committed to providing further military support to help Ukraine exercise its inalienable right to self-defense against Russian aggression and defend its territorial integrity and sovereignty. To this end, the European Council calls on the Council to work expeditiously to further increase military support,” says in the document.

It is also reported that the European Commission will soon submit a proposal to provide Ukraine with new macro-financial assistance in the amount of up to €9 billion in 2022.

In Russia, there was an explosion at an ammunition depot: four people were killed