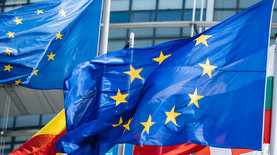 The leaders of the European Union believe that only Russia is responsible for creating the global food crisis. This is stated in the decisions adopted on Thursday at the summit in Brussels conclusions European Council.

“Russia, which is using food as a weapon in its war against Ukraine, is solely responsible for the global food security crisis it has provoked. The European Council calls on Russia to immediately stop attacks on agricultural facilities and grain terminals, and to unblock the Black Sea, in particular the port Odessa, to ensure the export of grain and commercial transportation,” the conclusions say.

The European Council expressed its support for the efforts of the Secretary General of the United Nations in this direction.

The EU leaders said in a statement that European sanctions against Russia do not prevent the free movement of agricultural and food products, as well as the delivery of humanitarian aid.

An exhibition of destroyed Russian equipment opened in Warsaw – news from Ukraine,

Ukraine has ratified the Istanbul Convention. Against the bonds. Why it matters – Ukrainian news, Society

This is not the end, many will suffer. Putin wants to divide Germany, but we will survive – Khabek – Ukrainian news, World