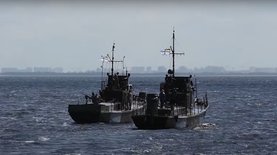 In the north of the Dnieper, a division of military boats was created to defend Kyiv; in the future, a flotilla will be created on the main river of Ukraine. This was stated in an interview with Briz by the commander of the Naval Forces Alexey Neizhpapa.

According to him, before the full-scale war, the main focus of the Navy was in the south – the Danube and the Dnieper-Liman Canal. However, the large-scale invasion of the Russian Federation forced to pay attention to the north: on the initiative of the command of the Ground Forces with the Navy, they jointly formed a division of military boats in the north of the Dnieper.

Neizhpapa said that the division is subordinate to the Kyiv defense forces. The main task of the boats is to support the forces that operate near the Dnieper.

“We will continue to build up our efforts not only near Kyiv. Now the enemy is in the south of the Dnieper. We must also have the appropriate forces and means that will confront the enemy on our rivers, on our waterways,” the head of the Navy said.

He noted that the formation of the river division began in March, and actions on the rivers are very different from work at sea. According to him, almost all the sailors who were in the capital joined the process. In the future, officers who serve on the rivers will be trained in military universities.

According to Neizhpapa, also in the future, a flotilla of several divisions of boats will appear on the Dnieper, which will be located in different cities on the river. In addition, he added that now in the Bug-Dnieper-Limansky canal active fighting continues.

Read also: Russia is trying to patch up the fleet with a “drowned boat” from Zmeiny – APU

Scholz: Russia’s attack on Ukraine means a change of era. Germany will continue to give weapons – news from Ukraine, Politics

The shelling of Kyiv is terrorism. Putin cannot defeat us by force. Therefore, it sows fear and apathy – news from Ukraine, Politics

To negotiate with Russia, you must first defeat her – Liz Truss – Ukraine news, Politics