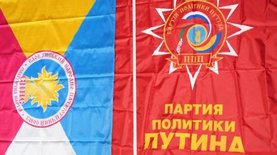 The Eighth Administrative Court of Appeal banned the activities of the pro-Russian party Rus United, formerly known as Putin’s Policy Party. This is reported in Facebook court.

“We inform you that the court has satisfied the claims of the Ministry of Justice: the activities of the political party Russ United have been banned,” the court’s decision says.

The money and other assets of the party, its regional, city, district organizations, primary organizations and other structural entities have been transferred to the ownership of the state.

REFERENCE. The party was registered in 2003 under the name of the Slavic People’s Patriotic Union. In 2005, the party changed its name to Putin’s Policy Party. The party took part in the 2006 parliamentary elections, where it won only 0.12% of the vote.

Zelensky on “peace in exchange for territories”: We will lose everything if we lose to Russia – Ukrainian news, Politics

How to defeat evil from Mordor. Rammstein-3 for Ukraine starts in Brussels – news from Ukraine, Politics

Candidate status in the EU: the European Parliament urged to support Ukraine and Moldova – news from Ukraine, Politics