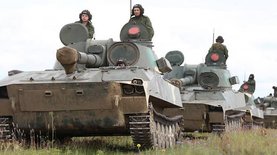 The Kremlin plans to blow up residential buildings in Mozyr, Gomel region, in order to draw Belarus into the war against Ukraine. About it informs Ukrainian intelligence.

The Main Intelligence Directorate received information that the Russian Federation will try to draw Belarus into the war against Ukraine with the help of a series of provocations.

According to intelligence, for this purpose, sabotage groups arrived in Mozyr under the guise of civilians, among which there are regular employees of the GRU and mercenaries of private military companies controlled by Yevgeny Prigozhin and Russian Defense Minister Sergei Shoigu.

According to intelligence, the plans of the DRG include the organization of a series of terrorist attacks in Belarus – the scenario that Russia used during the incitement of the war in Chechnya will be used. Then the special services of the Russian Federation organized explosions in several houses in Ryazan, blaming the mythical “Chechen militants” for this.

The GUR claims that the Russian GRU is planning a series of artillery and missile strikes on the Mozyr Oil Refinery, civilian infrastructure and residential areas. During the shelling, residential buildings, hospitals and schools will additionally be blown up.

The Kremlin believes that this will create a “casus belli” for the Belarusian dictator Alexander Lukashenko, and he allegedly will not have the opportunity to avoid participating in the war.

The Main Intelligence Directorate also reported that, having this information, the officers of the Belarusian army began to evacuate their families from Mazyr.

Read also: Lukashenka’s army is digging trenches. What is Belarus preparing for on the border with Ukraine

Poland has long been under the guns of Russia – a representative of special services – Ukrainian news, Politics

Sandu arrived in Kyiv. Will visit Irpin, Bucha, Borodyanka and meet with Zelensky

Zelensky collected the headquarters of the supreme commander on a possible invasion from Belarus – Ukrainian news, Politics

The Pentagon clarified which 18 Coast Guard boats will be handed over to Ukraine – news from Ukraine, Politics