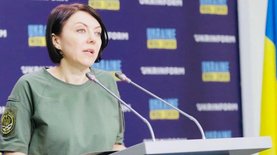 The publication of information about the alleged liberation of several streets in Kherson or new weapons at the front harms the Armed Forces of Ukraine. About it informed Deputy Minister of Defense Anna Malyar.

According to her, two former people’s deputies and one current one began to publish information about weapons used in the Kherson direction, as well as about “good news from Kherson and busy streets in the city.” She noted that such publications harm the Armed Forces of Ukraine.

“Even if you have your own sources of information at the front, you don’t need to write on social networks the details of the military operations of the Armed Forces of Ukraine. Moreover, the sources at the tactical level do not know the whole situation as a whole, because they have an idea only about a fragment,” Malyar said.

The Deputy Minister of Defense wrote that information about the loss or liberation of a settlement, which is published before the end of military operations, is considered incorrect, she urged to wait for information from the General Staff.

“During the war, military information is deliberately submitted with a delay in time – this is the rule of informing under martial law. It is due to military expediency during operations and security measures. This means that the disclosure or distortion of information about the details of a military operation before it said official sources, harms our Armed Forces and makes it difficult to carry out the assigned tasks,” Malyar wrote.

Read also: The Russians probably recaptured the eastern bank of the Ingulets River in the Kherson region – ISW

Plan B: Ukraine is preparing for the impossibility of deblocking seaports – Ukrainian news, Politics

Rocket attack on Nikolaev in the morning: high-rise buildings are damaged, there are victims – news from Ukraine, News of the regions