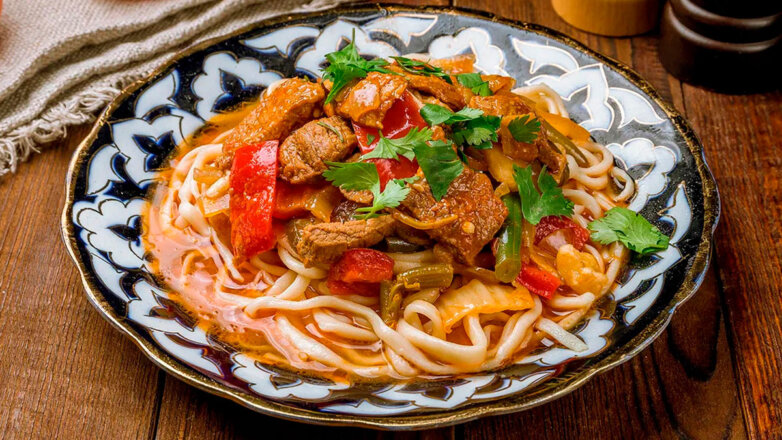 According to professionals, the most difficult thing in cooking lagman is making noodles. If you cook the dish according to the rules, the purchased one will not work – you need to make it yourself. But there are other secrets as well. They concern, among other things, the choice of ingredients. Chef Maxim Tarusin told about how to cook lagman properly.

For those who have never cooked lagman, Tarusin advises taking ready-made noodles. Suitable fresh, not frozen, writes “Deli”. When making your own noodles, you need four ingredients:

Prepare it ahead of time. It should be rich and rich. It is best to take meat on the bone. You can also add onions, carrots and other roots. The lagman broth is cooked for two to three hours.

Meat, vegetables and other ingredients for lagman

The next step is to prepare the waji, a meat and vegetable sauce. Traditionally, any meat is used for lagman, with the exception of pork. Tarusin prefers young lamb. From vegetables, he advises taking onions, garlic, Beijing cabbage, green beans, green and red peppers, tomatoes or tomato paste. From spices – star anise, cumin and coriander. You can add cinnamon. Waju is cooked on fat tail or beef fat. If you do not like such a fatty option, you can use ordinary vegetable oil.

It is better to cook the noodles themselves in portions, stirring so that they do not stick to the bottom and stick together. First, the noodles are laid out on plates, then they are poured with a thick sauce of meat and vegetables.

Spicy lozi sauce for lagman is made separately. It contains garlic, hot and sweet peppers. They need to be crushed with a blender and fried in oil, adding salt and coriander. It is served in a separate dish so that everyone can adjust the spiciness of the dish to taste.

The secret of a delicious lagman lies in the fact that the dough must always be closed so that it does not dry out, the brand chef of the Uzbek cuisine restaurant said earlier. He also shared other secrets, how to cook lagman.

Vilfand predicted “January” frosts down to minus 15°C in Moscow

Chevrolet crossovers will return to Russia thanks to parallel imports