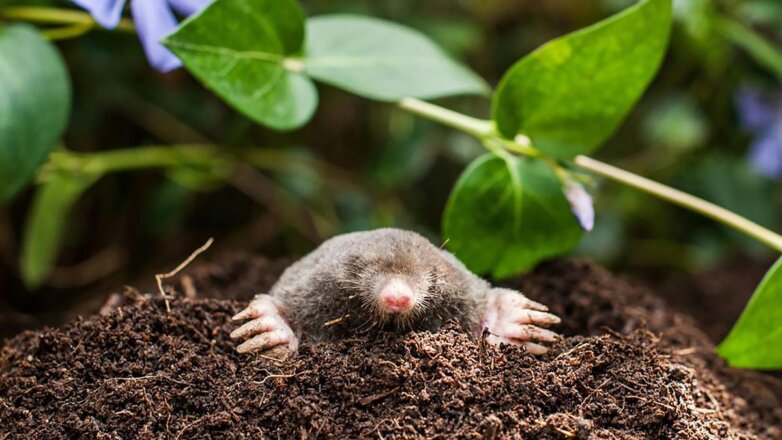 Moles often appear at their summer cottage in winter, when there is no active work of the owners. In the spring, when the snow has already melted, traces of the presence of this animal can be seen. Contrary to popular belief, moles do not eat the roots of plants and trees, although they tunnel around and under them, which can harm crops.

Moles help aerate the soil and reduce the population of harmful insects. But if there are too many of them on the site and suffer from this plant, then you should resort to scaring methods. There are at least five humane, but effective ways to protect the garden and summer cottage from moles in winter.

Moles are endowed with sensitive hearing, which helps to navigate in space in the absence of vision. That is why noise methods are considered quite effective. The repeller can be easily made independently from a can for canned food or drinks, and then installed next to the molehills and around the entire perimeter of the summer cottage.

It is necessary to put the jar on a metal or wooden pin stuck into the ground about 30 cm deep. Blades should be made on the jar by cutting parts of the object with a knife and bending. Swaying in the wind and hitting the pin, the jar makes sounds and vibrations that are unpleasant for moles. You can also do it yourself plastic bottle spinner – This is another humane way to scare away moles using noise and vibration.

Such repellers create vibrations that are not audible to humans, but expel moles from the site. They are sold in special stores and are also inserted into the ground around the perimeter of the site.

If there are no moles on the site yet, but you saw molehills from the neighbors, you can protect the summer cottage in advance with the help of underground barriers. To do this, it is necessary to dig sheets of slate or profiled sheet along the entire perimeter of the cottage to a depth of at least 50 cm. When the mole encounters such an obstacle in its path, it will have to bypass your possessions. The design will protect the site in winter and summer, and more than one year, writes Design Homes.

An animal-safe trap can be made from a simple large glass jar with a wide mouth. It is necessary to put a can of worms on the bottom and dig it into a mole tunnel, which is actively used. To check whether the animal often uses this or that move, you need to press it down a little with your foot, and if it is soon restored, then the mole is involved in this. When digging in a can, the neck should be flush with the tunnel. From above, the passage is covered with a board or slate, so that the beast does not notice that the passage has been dug up.

You can install several of these traps on the site, but you need to check them at least twice a day, otherwise the animal may die. A caught mole should be released away from housing, in a forest or in a field.

The mole is well developed not only hearing, but also the sense of smell. Therefore, experienced gardeners suggest placing substances with a strong odor in the tunnels. It can be coffee grounds, rotten eggs, hot peppers, rags soaked in ammonia or gasoline.

A popular method is with castor oil. But it can be dangerous for moles, as the oil causes them to upset their food system.

Today there is many ways scaring away moles and protecting gardens and summer cottages from them. In some cases, you can use folk remedies and even simple old alarm clocks.

Petersburg begins the transition to a new snow removal system