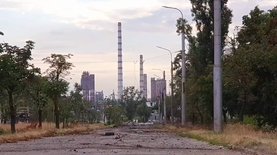 The Ukrainian military repulsed the attack on Lysichansk, but received a command to move away from Severodonetsk. Russian forces took possession of Nikolayevka. This was reported in Telegram and on the air of the national telethon the head of the Lugansk OVA Sergei Gaidai.

Head of OVA notedthat in Severodonetsk the infrastructure was completely destroyed, 90% of the houses were damaged or destroyed. According to him, the military will have to be withdrawn from the city. Gaidai believes that it “does not make sense” to keep them in broken positions – the number of dead is growing.

“They (the defenders of Ukraine, – ed.) have already received a command to withdraw to new positions, to new fortified lines, and from there it is already normal to fully conduct military operations and inflict damage on the enemy,” he said.

The operational command of the East could not comment LIGA.net Gaidai’s words on the phone.

Also, the bodies of two dead were found in Lisichansk, a wounded man was hospitalized in Chernivtsi. Many houses and housing and communal services have been destroyed in the city, and the surrounding villages are suffering from Russian shells.

In addition, Gaidai said that the Ukrainian forces had stopped the offensive in the area of ​​Borovskoye. The invaders continue to advance in the Mirnaya Dolina area, the fighting continues. The Russian army took possession of Nikolaevka.

SBU detained a Sumy resident accused of reconnaissance of the positions of the Armed Forces of Ukraine – news from Ukraine, Incidents

Georgian PM: EU candidate status is for us, and then for Ukraine – news from Ukraine, Politics