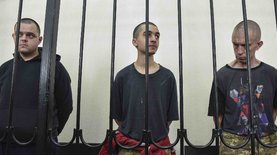 Captured Briton Aiden Aslin, who fought in the Armed Forces of Ukraine and was taken prisoner, contacted his relatives and said that terrorists from the DPR would soon execute him. British newspaper writes about it The Telegraph.

The publication reports that Aslin called his relatives and said goodbye to them, saying that he would soon be executed. He also told his family that “his time is running out.”

Aslin’s grandmother Pamela Goll said that Aiden called his mother and said that the DPR terrorists told him that allegedly no one from the UK had contacted him about his release, and therefore he would be executed.

Recall that in the Donetsk region, the invaders captured the Moroccan Brahim Saadoun and the British Aiden Aslin and Sean Pinner. They were kept in basements, and on June 9, the invaders decided to kill all three prisoners, calling it a “court decision.” Aslin, Pinner and Saadoun moved to Ukraine and signed a contract with the Armed Forces of Ukraine even before the full-scale invasion of the Russian Federation.

Read also: How helicopters flew to the besieged Azovstal – a participant in the operation gave an interview

SBU detained a Sumy resident accused of reconnaissance of the positions of the Armed Forces of Ukraine – news from Ukraine, Incidents